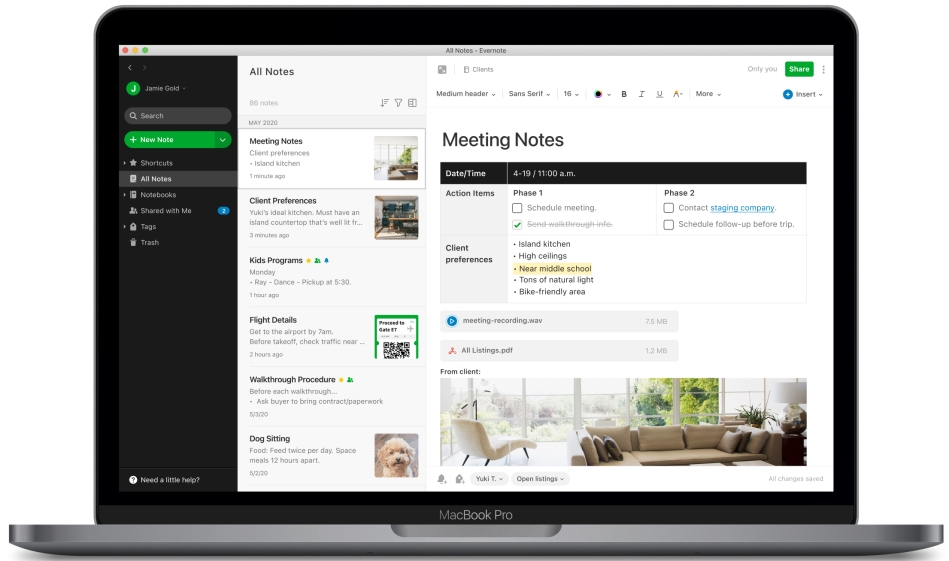 Both macOS and iOS platforms come with an excellent note-taking application: Notes. Yet, as we all know, Apple’s own apps aren’t for everyone.

So in this second in the series of looking at alternatives, I’m going share my perspectives on one of the most popular notes applications out here: Evernote.

I was an avid Evernote user – nay, evangelist – for years. I pretty much bored all my colleagues ranting about how useful it was. I used it for everything. Handwritten notes from my notebooks were scanned in with the iOS app. important reference emails were forwarded to Evernote via my unique email address. I managed projects, created checklists, organised my accounts and planned my business travel.

It really was a Swiss Army knife of notes apps.

I don’t remember exactly when I lost some of that enthusiasm, but as things stand, I’m back to using the Apple Notes app on my various devices, owing to its excellent hand-writing capabilities with the Apple Pencil. There’s no such thing as the ‘perfect app’ and there are a few things I miss from my Evernote past.

There’s still a lot to be said for Evernote.

Evernote still has its fans. Despite competition from multiple high-end and complex apps like Notion and Obsidian, its simplicity and power are still very attractive. So what’s so good about Evernote?

It’s a multi-platform app, so if you use a PC and an iPhone and an iPad, you can access your synchronised notes on all devices.

It’s fantastic for scanning in paper documents and then recognising the text when you search for it later. I’ve been amazed by the accuracy of is OCR (optical character recognition) over the years.

You can add a variety of content to a note: pictures, text, audio notes, checklists, bullets etc etc.

Unlike Apple Notes, you can share your notes easily with Evernote. You can either do this with a unique URL so someone can access the note online, or share with another Evernote user.

Unlike Apple Notes, you can add reminders to specific notes. This is super helpful when your notes library is massive, but you just need a certain note to pop up out of the pile at a pre-determined time. I used to use this with my frequent business travel agendas, with notes containing flight details, business addresses, hotel reservations and any key tasks, all listed in a single note

The slow pace of development bemoaned by many seems have been addressed, with a series of updates across all its platforms. The last update to iOS was impressive and seems to have increased the speed of the app. The latest macOS update adds an Evernote Home to the app, bringing together your recently created, most accessed and other content in handy widgets.

I really like the look of this and could imagine starting my working day with a review of Evernote home to get some clarity.

There are a few drawbacks to Evernote. First among these is the cost. Unlike Apple Notes, there’s a subscription and it seems to be getting more expensive over time. While you can definitely start fo free, the free version limits you synchronising between two devices. If that’s all you have, then go for it.

Premium costs £4.99 per month and adds significant functionality. This is what I was using before I moved to Apple Notes. I’m definitely not anti-paid apps. How else are they going to fund development?! But if you’re already paying for multiple subscriptions, the cost of Evernote may give you pause of thought. Especially when compared to its competitors.

I”m not saying I’ll never use it again. But if anything, I’m trying to use fewer apps on my devices and keep things simple. The latest update to Evernote on macOS sparked my interest in the app for the first time in a long time.

I’ll definitely keep an eye on its next steps. I’m definitely ‘That Apple Fan Boy’, but I’m not averse to using other company’s apps if they’re superior or just suit my needs.