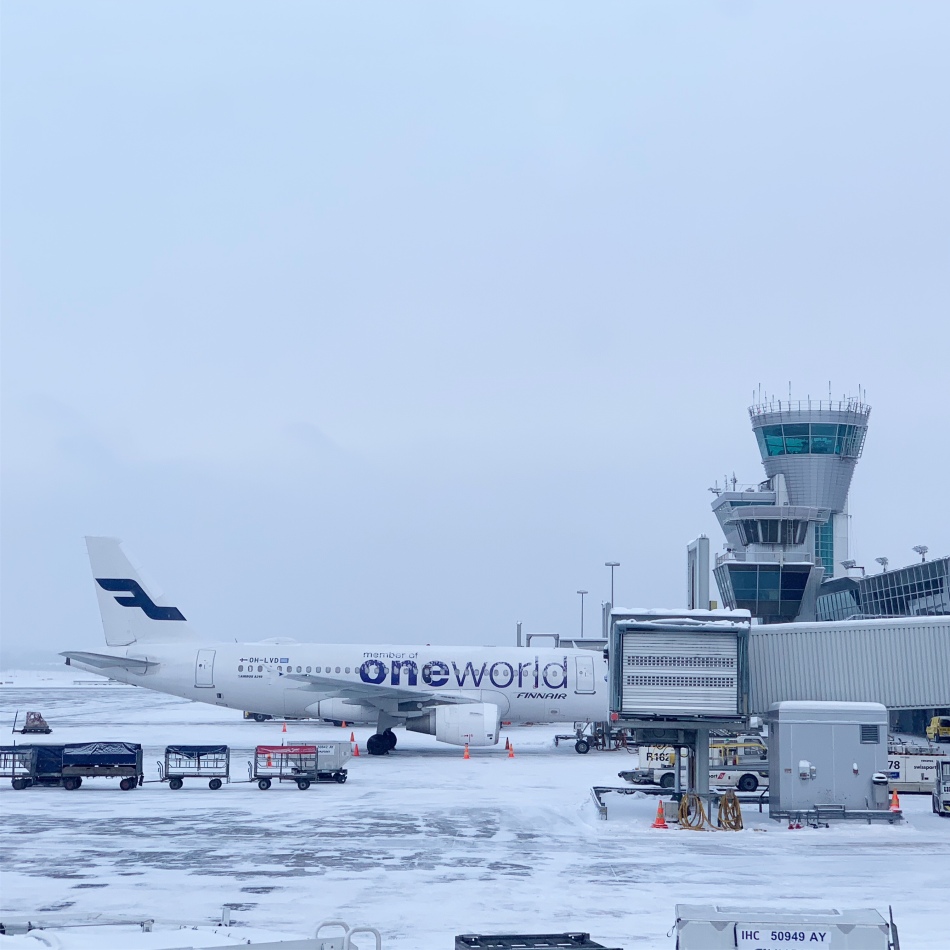 After adequately refuelling on coffee in the lounge, it was time to get my flight to Helsinki.

With little to keep me in the lounge, I headed to the gate with just under an hour to go. My experience with Finnair is that they board with plenty of time, so I expected us to be boarding about half an hour before departure time. And I hate queuing.

I saw a row of seats that were free, but as soon asI got closer, I realised they were marked for people with disabilities. However, moments later, four of the most obnoxious people I’ve encountered came and took them anyway. They left an elderly couple to sit on a radiator, while they enjoyed seats. Obviously, I instantly pigeon-holed them as arseholes.

The Finnair ground crew called Group One and I stepped forward to board. A swipe of my phone on the screen and I ended up being the first to board the plane. I was welcomed – as expected – warmly and with lots of smiles by the Finnair crew. They couldn’t have been lovelier the entire flight.

Overall, boarding took a long time, but I just sat back and listened to Spotify. Unfortunately, the arseholes I’d spotted at the gate ended up next to me and behind me. They carried on a conversation – at some volume – all during the safety announcements, and for the remainder of the flight. I was never happier to have some noise-cancelling earphones in my backpack.

Throughout the flight, the service excellent – lots of smiles, laughs and patience from the crew. It reminded me how much I’m looking forward to our next visit to Helsinki in March.

Lunch was lovely and I took the opportunity to order some champagne. Much to the annoyance of the arsehole next to me, after he’d ordered his Carlsberg. He somehow felt he’d been hard done by and complained to the people sitting behind us, while assuming I didn’t speak any Dutch and couldn’t understand him. Not subtle.

It was a super relaxing flight, made all the better by the attentive and very friendly crew. My seat was comfortable – the cabin had a 3-3 layout, but in business class, the middle seat was blocked, giving my small frame just a little bit more elbow room.

I watched some Netflix (The Punisher!) and a couple of podcasts on my iPad. The seats on board have an excellent seat-back space for a tablet, placing your device at eye-level, above your tray. It’s incredibly convenient, meaning you can watch something while eating.

Why don’t all seats have this?

And then the pilot says we’re on approach to Helsinki and it’s “light snow and minus 9”. Boy am I glad I brought some extra clothes in my carry on!

The approach into Helsinki was apocalyptic in terms of snow. I’m not sure I could ever get used to that kind of weather. But it’s lovely for a visit! And very scenic from a distance.

Time to get to the Finnair lounge and prepare for the next leg of my journey: to Seoul!

2 comments on “Journey to Japan – Part Two: To Helsinki!”