I’ve just landed in Seoul Incheon Airport after a superb flight with Finnair. I didn’t get as much sleep as I’d planned, but that was all my own fault.

I enjoyed a couple of hours in the very lovely Finnair lounge in Helsinki Airport before boarding my flight. The lounge is in the middle of an upgrade, and while it’s looking great, I was a bit disappointed to learn that the sauna was no longer there.

I’ve wanted to use that sauna ever since I discovered it existed. I hope, when the refurbishment is complete, that it will be back. I’m flying to Helsinki in March and it would be a great experience to round off the trip. 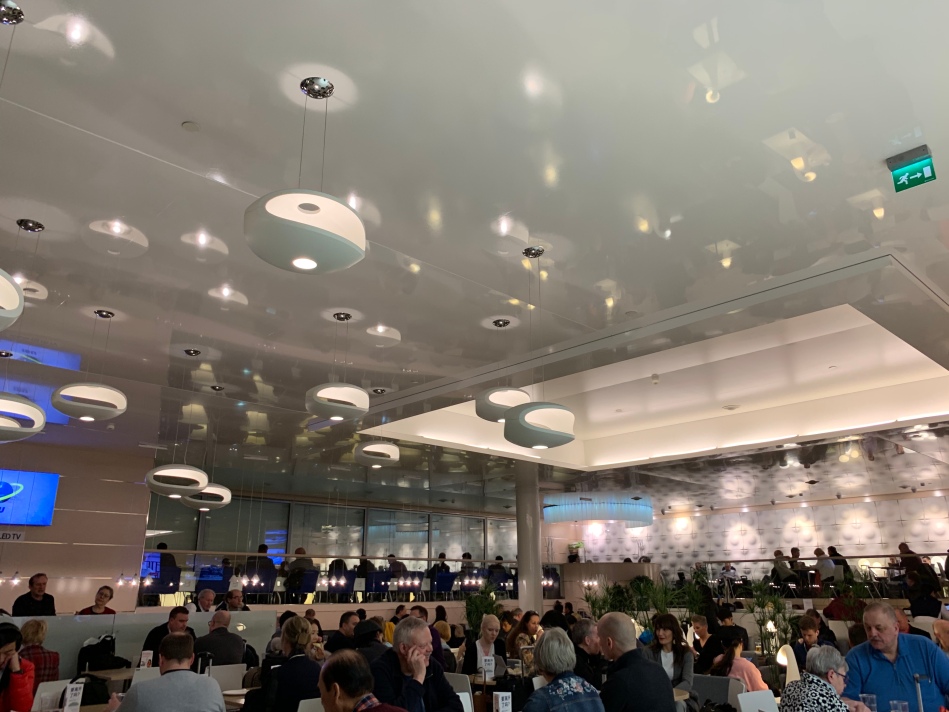 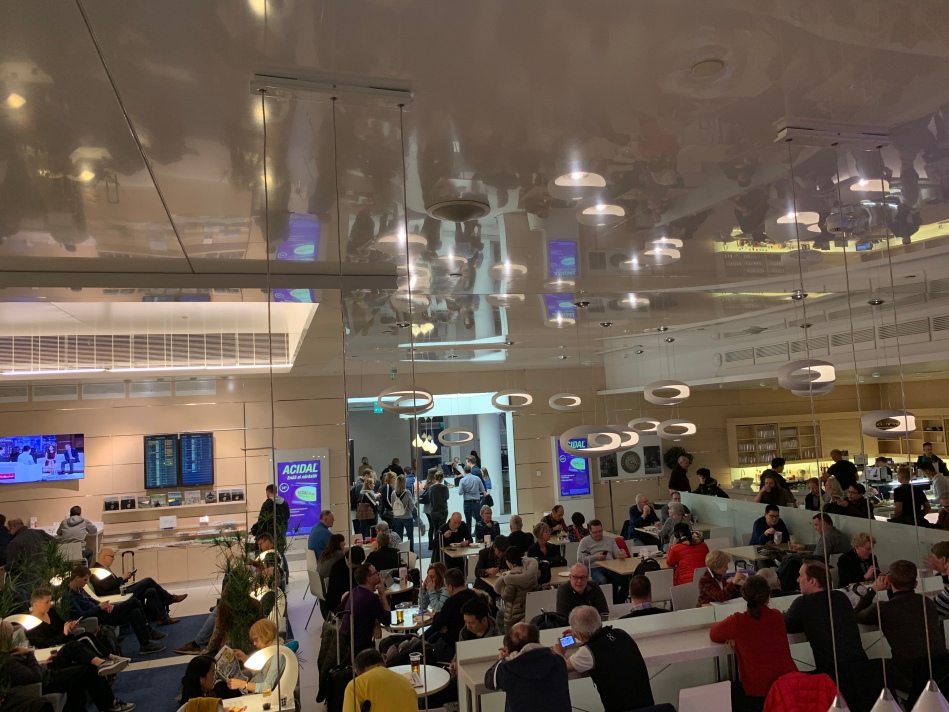 There’s a great selection of food and drink in the lounge, and a well-stocked bar. Staff are super friendly and very helpful. Even though I’d enjoyed lunch on my flight from Amsterdam, I somehow found room for a salmon sandwich, a coffee and a self-pulled draft beer. I’m a sucker for lounges!

Boarding my flight to Seoul was very efficient and I was met by more of the same, smiling and friendly Finnair cabin crew. Honestly – they’re not paying me! I just find their smiles a welcome change from the grumpiness I experience when getting on British Airways flights between London and Dublin.

The Business Class cabin is very nicely laid out and I had a window seat on the left – 2A – giving me under seat storage, as well as a very large bin overhead. After extracting the essentials: Bose headphones, iPad and charging cable, all my belongings went overhead, leaving the floor space clear for my feet.

Not that I need the legroom! 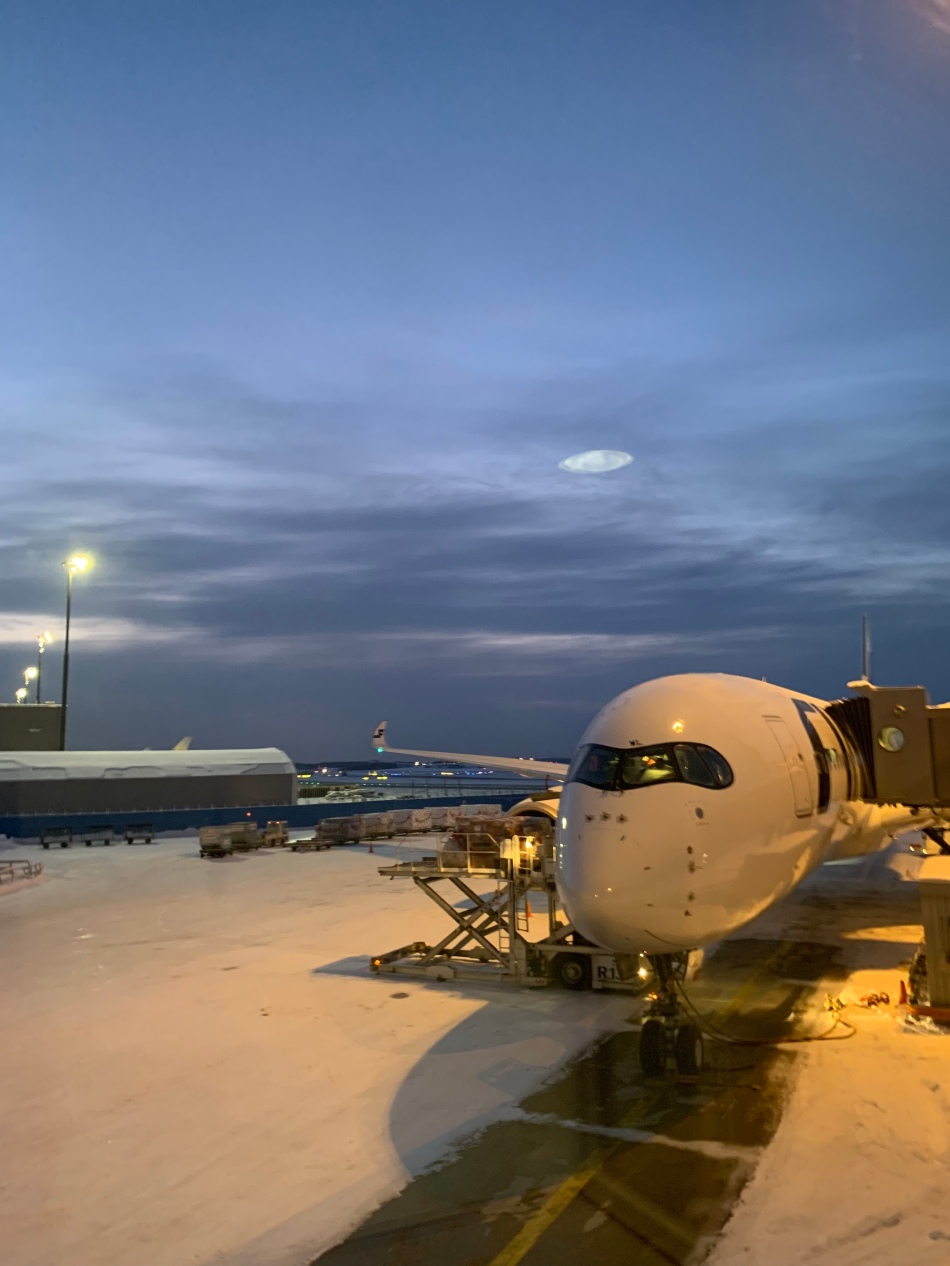 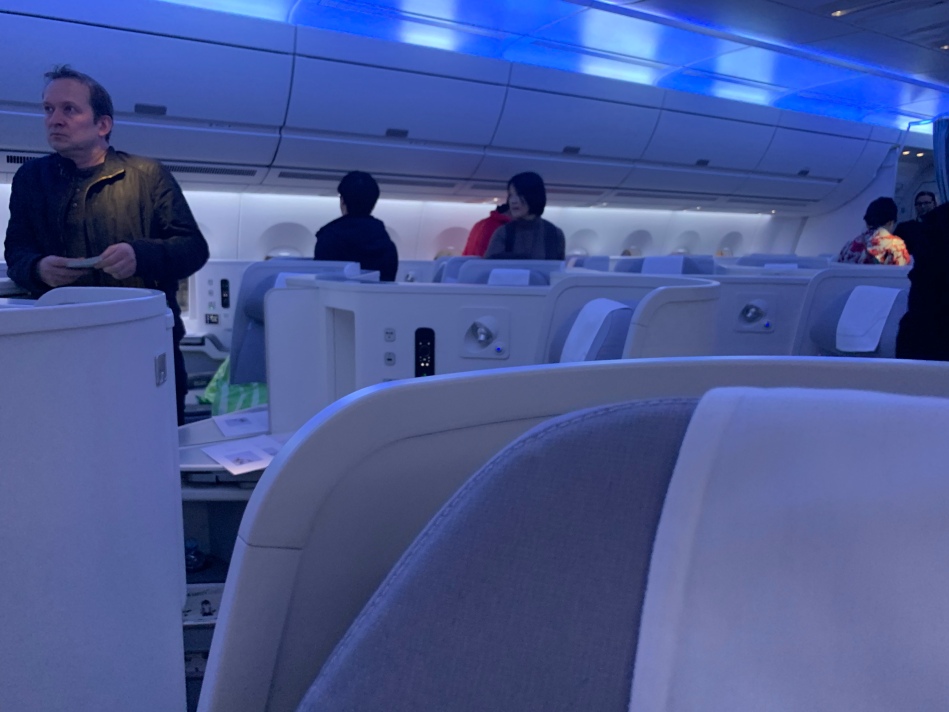 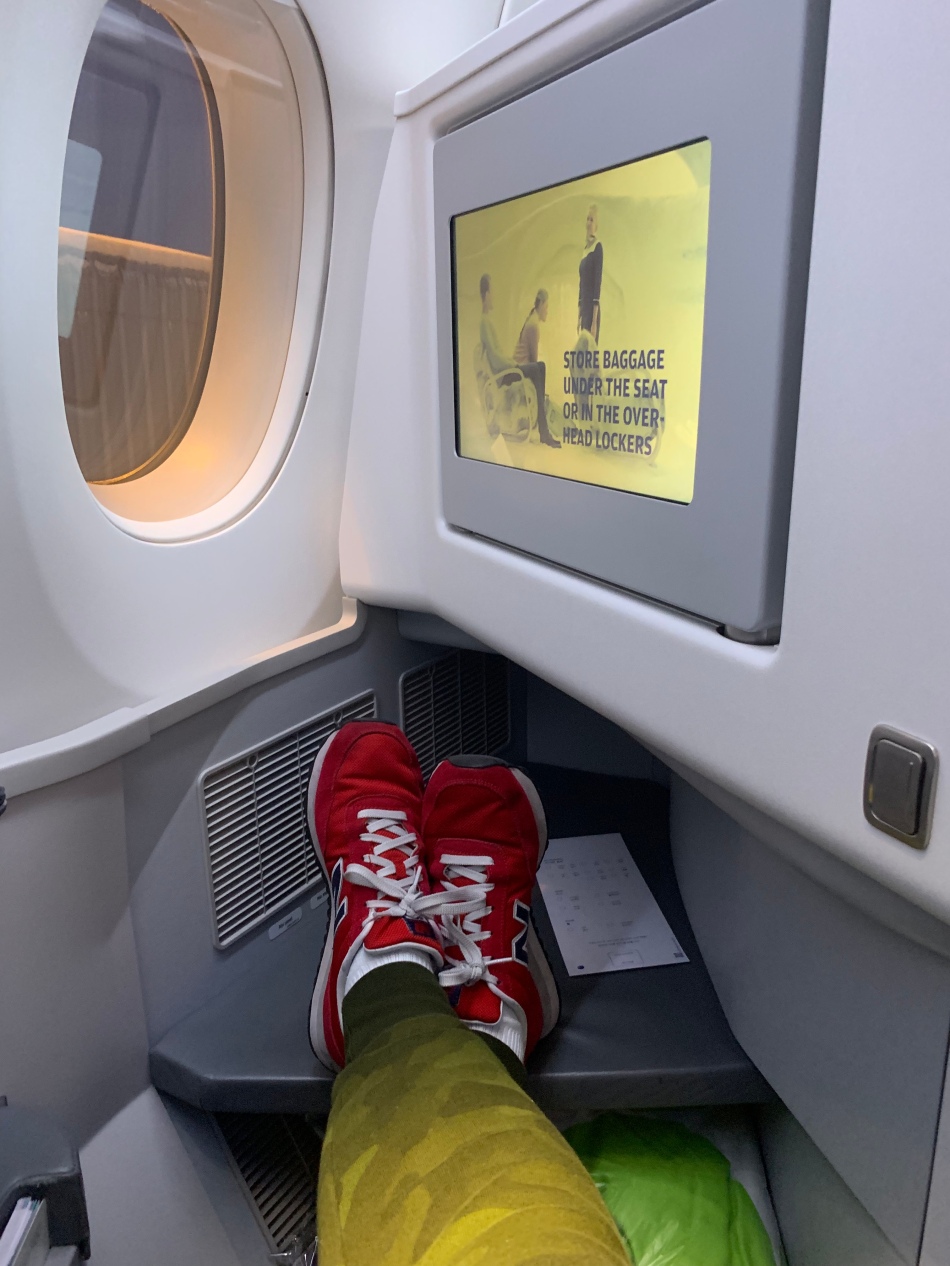 It wasn’t long before I had a glass of champagne in my hand and was approached by the purser who introduced herself to me and welcomed me on board. We had the first of several very enjoyable chats about travel destinations, but of us fans of Japan. I was delighted to learn that Finnair are going to start flights to Sapporo – an adventure for 2020 perhaps? 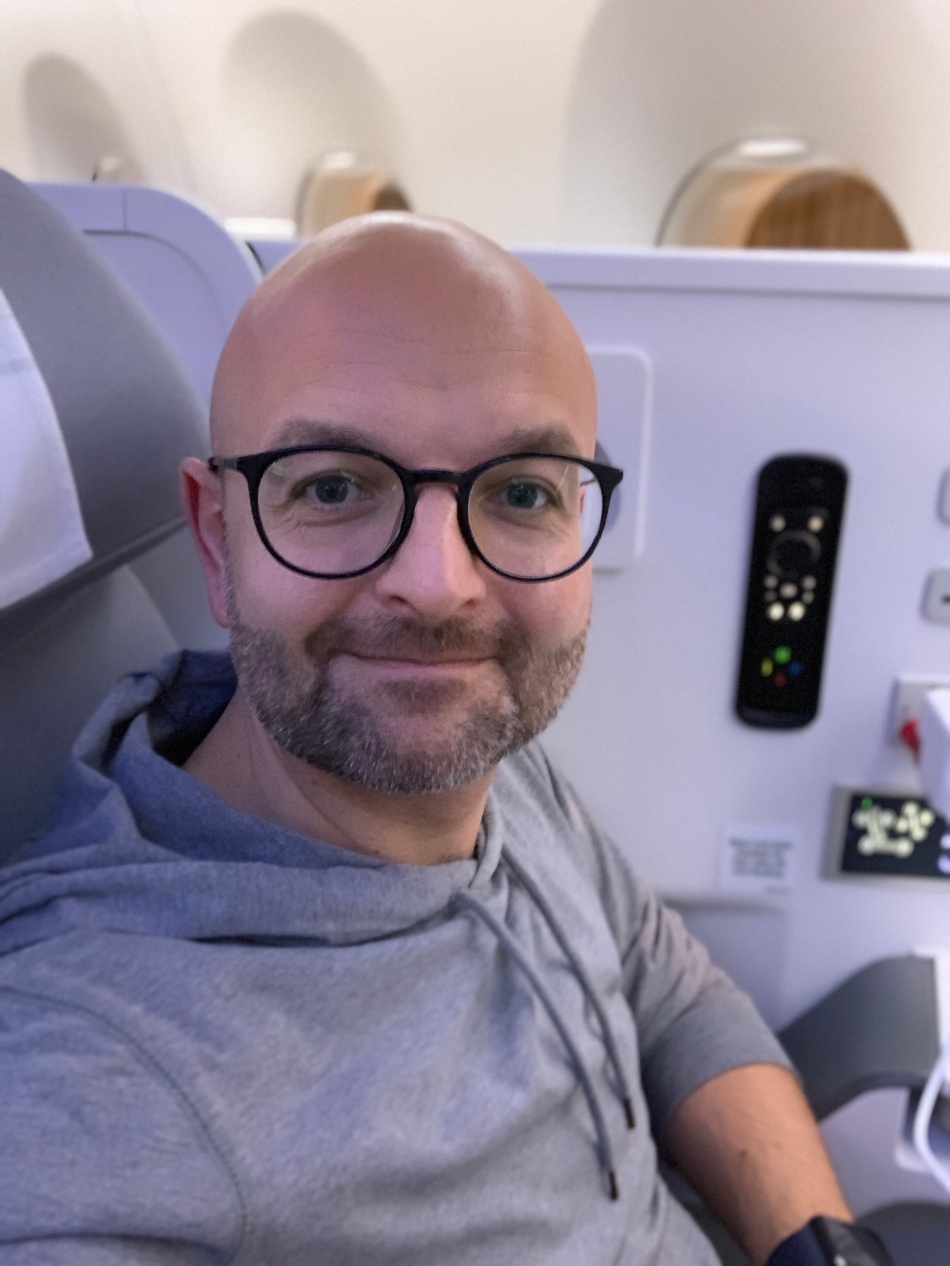 Very soon after take-off, I headed to the bathroom to get changed into my pyjamas for the remainder of the flight. I’d brought my favourite set of ‘Qatar Airways’ complimentary PJs, retained after our flight back from Singapore last March. Very comfortable and easy to sleep in – considering I don’t wear any at home. Yet even I, the dedicated naturist, know that flying desnudo is frowned upon by the cabin crew. Yes, even chilled out Finnish cabin crew.

So PJs it was.

I had a quick scan of the menu and then chose my food for dinner. After a chat with the crew member taking orders, I changed my mind and went for the ‘limited edition’ cod. I’m so glad I did! The meal was delicious.

Dinner started with a glass of ‘Blue Sky’, their in-house champagne cocktail and an amuse bouche. The the main course of cod with a lemon sauce and roasted onions. The started of beef was served at the same time.

Yes, I still had room for more! I was served both the ice-cream (superb!) and the cheese board. And – just between you and I – I was actually served a second cheese board when I complimented the first so much! I was also offered more ice-cream, but I know my limits.

The champagne, however, continued to arrive and I thought it would be churlish to refuse.

I settled back into my seat and watched ‘Ocean’s 8’, which I’d missed in the cinema. After that, there wasn’t much else I wanted to see on the onboard entertainment selection, so opted for the Christian Bale ‘Moses’ film, which was just the thing to send me to sleep. Utter bilge.

I woke up as other passengers were being served breakfast and it wasn’t long before I was tucking in too,. Despite everything I’d consumed just a few hours before, I was ready for another meal. My own capacity for gluttony surprises even me from time to time.

Breakfast was tasty, but I most appreciated the coffee. After just three hours sleep, I needed something to wake me up in advance of landing. I had another lovely chat with the purser and then, with 30mins before landing, I got changed out of my pyjamas and back into ‘street clothes’ in preparation for Seoul Airport. 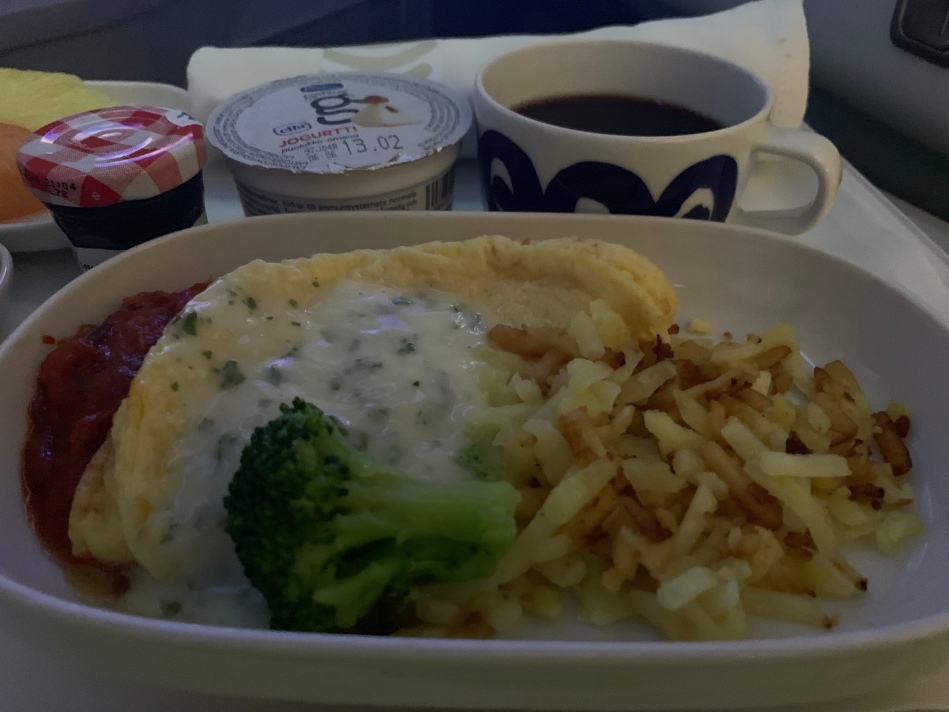 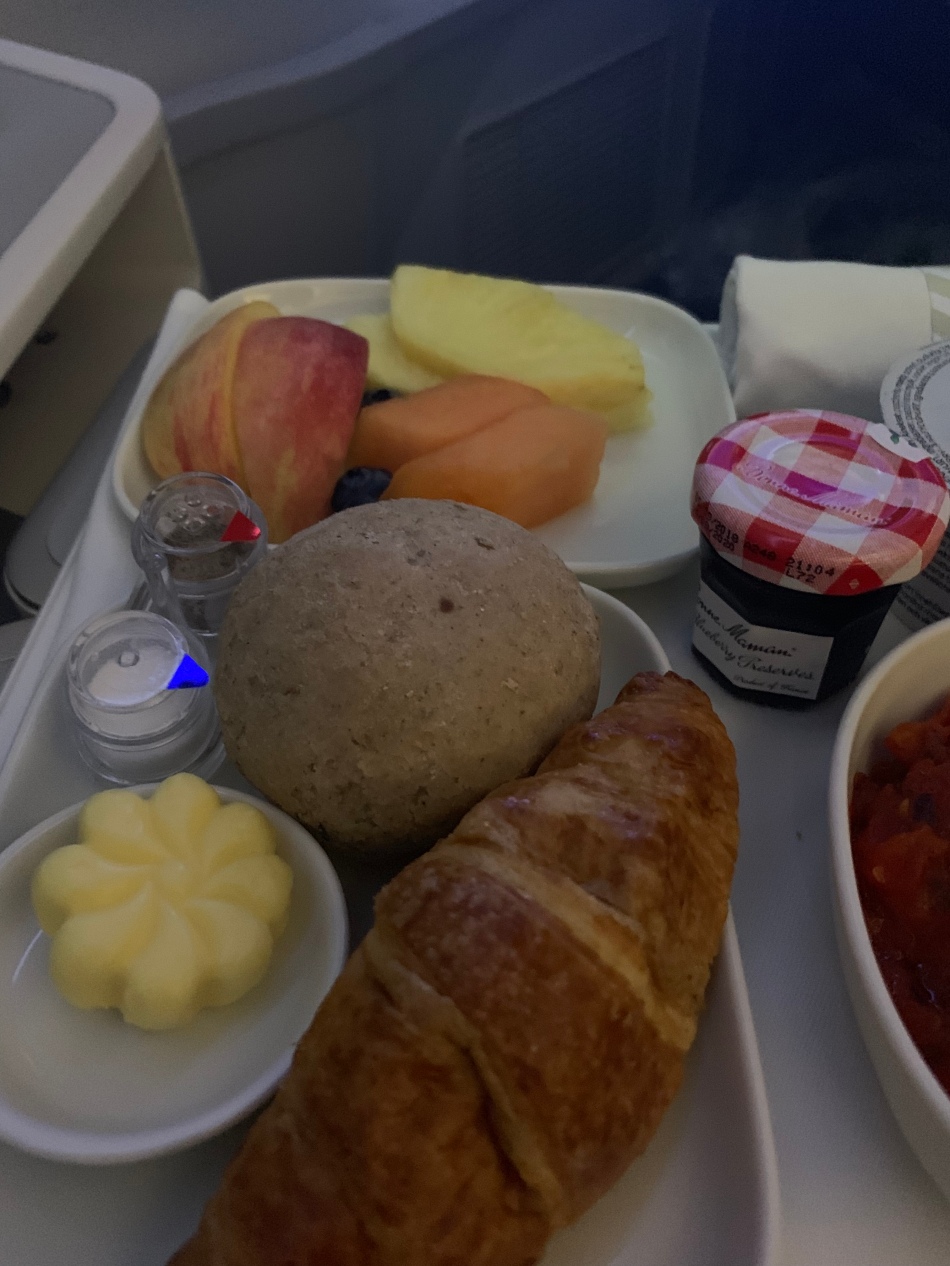 I have to say, the atmosphere changed as soon as I stepped off the plane. After being pampered for hours and hours, I was in the thick of the hustle and bustle of a major Asian airport, with no idea of where to go. Add to this a lack of sleep and I was utterly confused.

I followed the transit signs and then panicked when I realised I’d no boarding pass for my onward flight to Tokyo Narita, with JeJu Air. I got to the security screening and had to fumble in my bag for the printouts so carefully prepared by @TheFrankFlyer. This and my passport got me into the transit area, which was quite overwhelming.

More like a mall than an airport terminal, it was rammed. It didn’t take me long to receive the absolutely crushing news that I really should have gone through customs and left the secure area if I wanted to visit the enormous spa in the basement.

I’d been longing to spend my layover soaking in hot tubs and sweating in saunas, only to find that there was no way for me to access it. I’ll be honest: I was deflated.

Then I remembered reading about free showers and they happened to be nearby. When you think ‘free showers’, you don’t necessarily think luxury, but these were great! Better even than the business class lounge at Narita, I’d say. 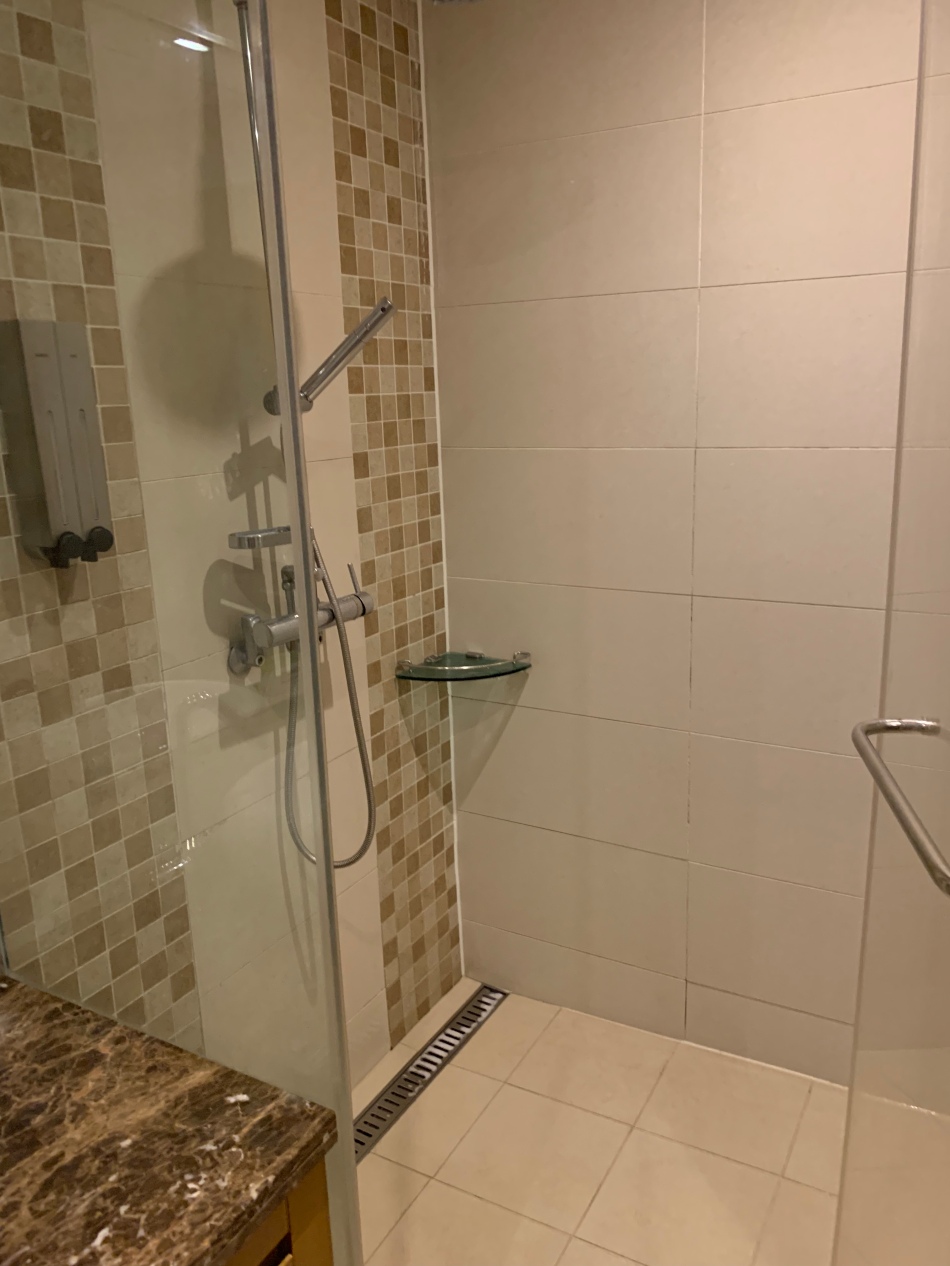 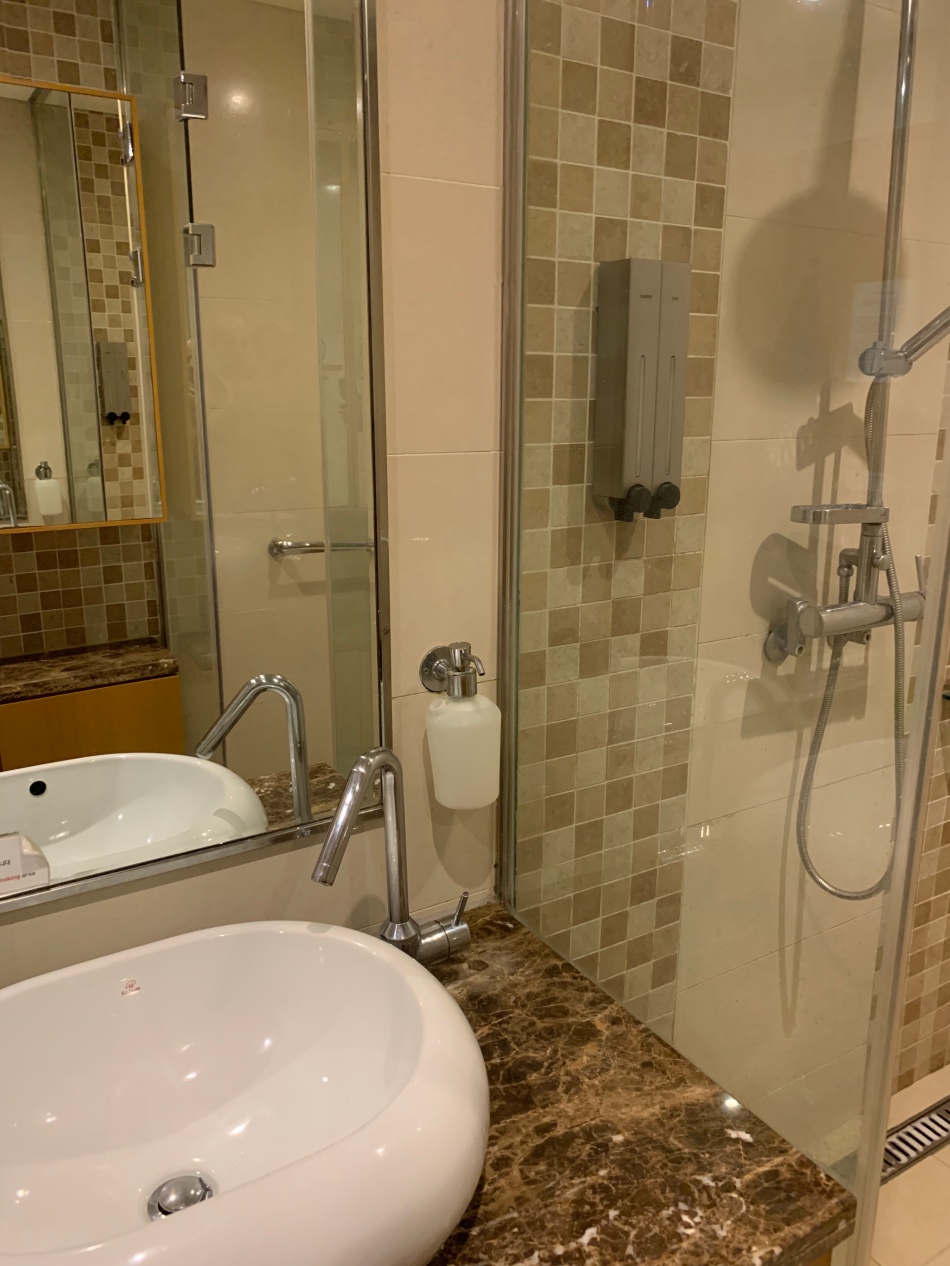 I had a quite lovely shower and felt a lot better afterwards. My face in the picture above reveals how tired I feel, but also how relieved I was to clean up. Just a few steps away was one of the larger lounges in the airport, which I could access with my Priority Pass card.

So I’m sitting here, rehydrating and people-watching and wondering what I’ll do with my time between now and my next flight. I have about three hours before take-off. But I also have a seat, electricity, WiFi and free food and drink. I don’t think there’s any need to go wandering among the high-end designer shops littering Incheon airport – or dealing with the crowds!

So, only one more flight until I’m at Narita. Then a transfer into Tokyo via the Narita Express and a 10 minute walk to the Tokyo Hilton, where hopefully @TheFrankFlyer will be there to greet me. All I can tell from his social media posts is that he made it as far as Hong Kong!

While on paper this journey looks like overkill, I’ve actually enjoyed it so far. Yes, it would have been nice to get a sauna in Helsinki and a steam in Seoul, but I’ve managed a shower and that’s better than nothing. I can get both in the hotel in Tokyo this evening if I like.

I think it’s time for more people-watching and a coffee.

2 comments on “Journey to Japan – Part three: to Seoul!”